“Uncertainty is simply a lack of information. When you have enough data, the right answer is obvious.”

I extensively analyzed 31 staking plans and then researched my own that I think combines the best parts of the top staking plans. “Whitaker Staking“

I apply my research on staking plans to Betaminic betting strategies and my Bf Bot Manager automated bot set.

Back in 2017, I was having another try at using the Lay The Draw (LTD) strategy on Betfair. And I was having some success, but I needed more data to find out exactly when the best entry and exit points were and what kind of matches were good to trade in for LTD. I started collecting data myself and making my own excel databases of the data I wanted. But it took a long time to collect and process this data, so I started looking for sites that might already have what I needed.

That is when I found a site called Betaminic.com. They offered free football data and historical bookmaker odds in the form of an online tool that I didn’t even have to download. While I was playing with that, I found several strategies that were profitable and began betting on them and forgot all about my LTD strategy. I wrote 2 books about the strategies, Winning Betting Strategies and Big Data Betting in 2018. I was betting level stakes on them and wanted to know if a staking plan could improve my results. I looked around the internet and found many sites that would lightly compare four or five staking plans, but I could not find a comprehensive and fair comparison of major staking plans.

That is when I found some software called The Staking Machine (TSM). The Staking Machine was an amazing piece of software into which you could load your betting history and then instantly apply over 30 staking plans to it. With Betaminic, I had strategies with thousands of historical bets to analyze, and this software matched it perfectly.

I knew it was going to take a long time, and there was a chance that I might not finish the project if I was just doing it for myself, so I decided that I would research with the aim of publishing my findings in a book. I am glad I decided to do that, because after a few months I was ready to give up. It was so complicated and some of the staking plans were so complex, that it was a real slog to get through them. Also, because I knew I was going to publish it, I had to make sure I was publishing the correct information, so when I made mistakes I had to go back and re-do entire staking plans. If I had just been doing the research for myself, I might not have been so thorough.

In the end it took me 8 months! At times I was carrying my laptop around with me all day to keep running multiple Monte Carlo simulations of 10,000 to 60,000 bet data sets that took over 2 hours each to complete, then logging that data and starting the next simulations. It was some hardcore number-crunching research.

To break down the different betting systems into groups, I separated them into odds ranges. For example, people who back favorites a lot, are generally betting on quite low odds. The kind of staking plan that works best for them may be different from someone following long-shot bets on horses, or someone betting on the over 2.5 goals markets in football. And then, of course, some people bet on a full range of odds, and they may need another kind of staking plan. So I wanted to find out what staking plan was best for different odds ranges that reflected different types of betting system and also to find out the ultimate staking plan that would work best whatever system you used. I also wanted to research that with both standardized data and real data from actual betting systems.

So in the end, each staking plan was tested against 8 standardized data sets and 8 actual betting systems. 16 data sets needed to be tested for each of the 31 staking plans I had. But I felt it was necessary to really know the answer at the end of it all.
As I was going through each staking plan, I started to see their good and bad points. And I had the idea to combine the best aspects of the top performing staking plans. That was how the 32nd staking plan in the book “Whitaker Staking” was created. After I finished testing all 31 existing staking plans, I created my own and tested that. And amazingly, it did come top of the rankings, beating out all the other big name staking plans. And one of the best things about it was that it was not as complicated as some strategies like Kelly Staking where you need to know your average winning odds, or D’alembert Staking where you need to know where you are in your series, or iTSM where you need to know if your win rate for the previous x number of bets is above or below the expected average. Whitaker Staking can be done without knowledge of that kind of data. It just needs to know how big your betting bank is now, and the odds of the next bet.

So if you are looking for the best staking plan for your betting system, then I can very confidently say that Whitaker Staking is the best. And I can back that up with an enormous amount of data, hundreds of hours of research, and yes, I wrote the book on it. 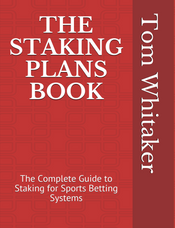 Buy as PDF download
Buy as paperback on Amazon

Includes a new staking plan that combines the best points of the top ranked staking plans.

This book will answer the key questions sports bettors have:

What is the best staking plan?

How much of the betting bank should be bet?

When should I increase stakes?

When should I withdraw profit from a betting system?

How long until my betting bank doubles?

What are some of the best sports betting systems available now?

Stop at a Winner Staking

In this 300 page book, an innovative research methodology levels the playing field and compares the staking plans on equal terms so that they can be ranked fairly. By testing the staking plans against both standardised artificial data sets and actual working betting systems, the most thorough comparison of staking plans ever has been achieved.

This book is a must for both casual and professional sports bettors.

If you already have a working betting system, this book will help you find the perfect staking plan for it and get even more profit out of it without increasing the risk level.

If you do not have a working betting system yet, this book will introduce you to Betaminic’s publicly available football betting strategies that are based on big data and which work very well with the staking plans recommended here.

You can see the detailed contents page in full by using the “look inside” function on Amazon books.

You can also find out how to get this book and my other sports betting books for free here.

The question that comes to bettors that have a working system is how much to bet and with what staking plan to use in order to maximise the profits of their systems while managing risk levels to avoid losing their betting banks. This book seeks to compare staking plans by reducing the essence of the staking plan to one key question “How long until this staking plan doubles my bank without increasing risk?” It is meant to make it easier for people to find the right staking plan for their system based on their risk level. Also, I will introduce the tool I use to anaylse staking plans, The Staking Machine (TSM), and show you how to use it for deeper and more accurate research into your own systems if you want to. I will also show how I used this tool to find the best staking plans for betting systems researched with Betaminic’s Big Data analysis tool “The Betamin Builder” and how you can use them yourself.

Available in paperback and Kindle from Amazon
or as PDF download from this site's shop.

Using the right staking plan will increase profits of betting systems that are profitable at level stakes. Read The Staking Plans Book to find out the best staking plans to use.